Neuromodulators – What Are They and How Can They Help

Home/DrossmanCare, GI Disorders, Gut Feelings/Neuromodulators – What Are They and How Can They Help
Previous Next

Neuromodulators – What Are They and How Can They Help

As you may have seen on Facebook Live with Dr. Drossman, the Rome Foundation is working to change the nomenclature of certain medications that can have multiple effects.

In the history of medicine, medications have been developed and named based on need. When people complained of difficulty breathing and asthma was diagnosed, bronchodilators were developed to act on receptors in the lungs to allow for dilation of the smooth muscle and make it easier to breathe.

If someone had an injury causing painful inflammation of the joints, anti-inflammatory medications were used.

The same concept applied to patients presenting to hospitals and asylums in the 1940s, 50s and 60s with emotional disturbance and psychosis. Treatments were developed to target receptors in the brain and alter levels of certain molecules, called neurotransmitters that were targeted to treat these problems. Accordingly, these medications then were named antidepressants, anxiolytics, and antipsychotics based on their anticipated effects. We now know that medications can have multiple purposes, for instance, aspirin can treat pain or be used to prevent a heart attack. We have also learned that the neurotransmitters which exist in the brain are found in the gut as well and actually, there is more serotonin in the gut than there is in the brain. Approximately 90% of all the serotonin in the human body is located in the GI tract. 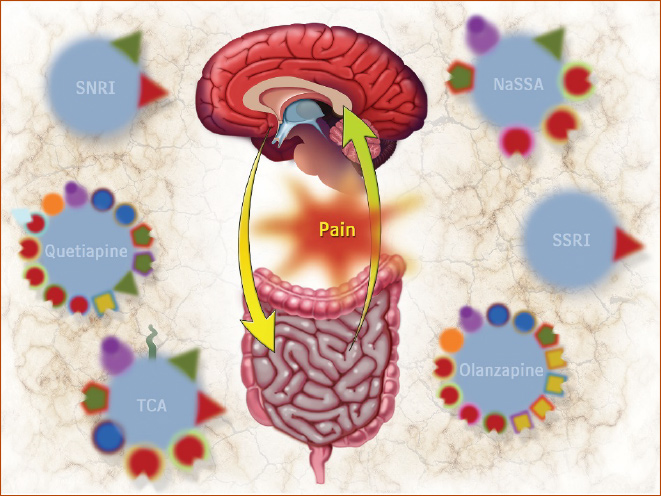 We know the GI tract and the brain share neurotransmitters which have different functions based on the organ of interest.  We also know that the enteric nervous system is hardwired to the central nervous system and that originates early in fetal development. Historically, Functional GI Disorders (FGIDs) has been the name given to gastrointestinal disorders that are not related to structural changes in the body, but rather which develop from a dysregulation in the gut-brain axis. This leads us to another change in nomenclature that the Rome Foundation is working to complete. Functional GI Disorders was a term that came out of necessity as GI symptoms were observed in patients without structural or organic disease and were intended to indicate disturbances in GI function. However, the term functional doesn’t adequately describe  the true nature of the physiological disturbances underlying Irritable Bowel Syndrome or Postprandial Distress Syndrome. It also carries a stigma and can make patients feel that their diagnosis is not valid or less important than a structural disorder such as Inflammatory Bowel Disease. For some patients, they don’t want to hear that they have a Functional GI Disorder because it is confusing and doesn’t really explain what is actually going on with them and their bodies. You may be able to describe the gut-brain axis and explain that the gut is not functioning in harmony with the brain or that the brain is interpreting signals from the gut in a non-functional way, however, it is more proactive to simply do away with the term functional altogether. Since the symptoms are the result of this gut-brain dysfunction, the Rome Foundation is working to reclassify and rename these disorders as Disorders of Gut-Brain Interaction (DGBIs).

Why does what we call a medication matter? First, calling a medication an antidepressant when looking to use it to treat pain can be confusing for patients and providers. A provider who is unfamiliar with medications such as SNRIs may not see a use for them in a chronic pain patient who is not having emotional disturbance. Or may choose an SSRI to treat abdominal pain when it does not help.  In that same vein, telling a patient you want to start them on an “antidepressant” may give the patient the impression that what they are experiencing is due to depression (i.e.,“in their head.”) The new terminology legitimizes their use for pain, sleep disturbance, nausea, and many other symptoms. It also gives providers and patients the confidence to adhere to medications that have been proven to reduce pain such as SNRIs and even increase the benefit of some neuromodulators by adding additional medication at low doses (i.e., augmentation). While it may take some time for medical providers to become more comfortable with these medications, patients can also learn to advocate for themselves with the knowledge that chronic pain and nausea are treatable and Disorders of Gut-Brain Interaction are not to be ignored.