What is a Rectocele and Do I Need Treatment?

Home/Gut Feelings, Pelvic and Anorectal Disorders/What is a Rectocele and Do I Need Treatment?
Previous Next

What is a Rectocele and Do I Need Treatment?

As some of you may know, Dr. Drossman has been answering patient questions via Facebook Live in his Friday Q&A sessions with The Rome Foundation’s Johannah Ruddy. One session focused on rectoceles and since this is a fairly common diagnosis among women, we are hoping to answer any further questions and elaborate on what a rectocele is, how it develops, and what treatments, if necessary, can be used. 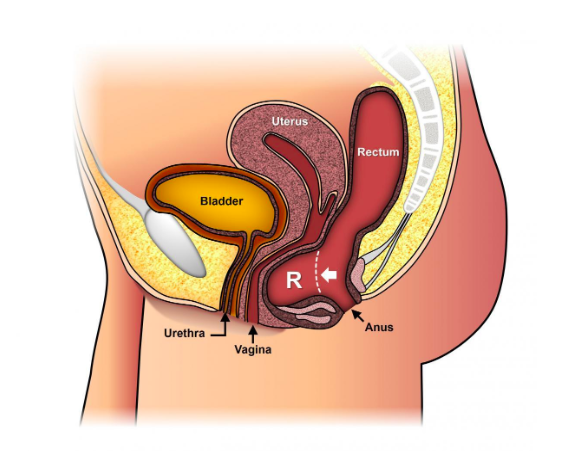 A rectocele is a herniation or bulge of the front wall of the rectum into soft tissue directly in front of it, namely the vagina (see diagram). It occurs often with excessive straining at defecation especially if the tissue between the rectum and the vagina, the rectovaginal septum, becomes thin and weakens. Stretching of the rectovaginal septum then leads to a bulging into the posterior vaginal wall. Similar to a blister in a tire, straining increases pressure in the rectum that stretches and produces a small pouch into the vagina just above the anal sphincter. A rectocele may be an isolated finding or occur as part of a generalized weakening of the pelvic floor muscles in which case you may also have a cystocele (outpouching of the bladder into the vagina) or other conditions such as uterine prolapse that can produce similar symptoms, namely fullness in the vagina. As shown in the figure above, the rectocele (R) is the bulge compressing the vaginal wall.  As discussed below small rectoceles may not produce symptoms but if a rectocele becomes larger, there can be a visible bulge into the vagina which may be seen on pelvic exam or felt by a patient as a sensation of fullness. Large rectoceles can also lead to discomfort in the rectum, a sensation of needing to have a bowel movement and incomplete emptying with a bowel movement.

As Dr. Drossman mentioned on FACEBOOK LIVE, rectoceles are often caused by weakening of the tissues in between the vagina and the rectum due to many causes including:

When rectoceles become symptomatic a conversation with your doctor is needed.  Problems may include:

A rectocele is often found during a routine physical examination, either during the vaginal and/or rectal exam and usually additional testing is not often needed. Your clinician will assess whether you are having any symptoms specifically related to the rectocele. When a rectocele is large and/or produces difficulties, a special x-ray may be ordered, called defecography. This test helps to evaluate the severity of a rectocele and the need for further treatment. A defegram that demonstrates retention of stool in the rectocele that leads to incomplete evacuation, may indicate the need for further treatment including possible surgery.

Treatment is needed only if the rectocele causes symptoms that interfere with daily living, however, most symptoms associated with a rectocele can be resolved with nonsurgical treatment.

Treatment options vary based on the size of the rectocele. If it is small to medium in size and does not cause major difficulties, the first recommendation is to have the patient avoid straining to have a bowel movement. Straining increases the pressure in the pelvis and can result in a rectocele enlarging, or straining can produce internal hemorrhoids. Treatment for constipation should also be addressed if a patient is having infrequent or hard stools that are difficult to pass with the goal of reducing treatment. If a rectocele prevents initiation of a bowel movement or difficulty finishing a bowel movement, the next step would be to advise splinting of the rectocele when having a bowel movement. Splinting requires the patient place their finger in the perineum or in the vagina and push up and back towards the rectum to help hold the rectocele up and straighten out the rectum for easier emptying. This can reduce the size of the pouch and prevent stool from being retained. If these conservative measures fail and symptoms become increasingly worse, surgical repair may be recommended. There are several approaches to surgical repair including a transvaginal, perineal, or transanal approach, however, most gynecologists and colorectal surgeons favor the transvaginal approach. If surgery is necessary, you and your surgeon would decide on the best approach.